We had a little excitement in OKC last week (March 2009). Fred Phelp's crazies came to see us. They protested outside of the Capitol building because the state senate had the audacity to allow a gay man, a state representative, to read a prayer. The horror. Thank Gawd we have these holy warriors to come and spread their own special brand of irrational hatred. Chutah and I came up with a fun little 'shop of their picture that appeared in the local news. 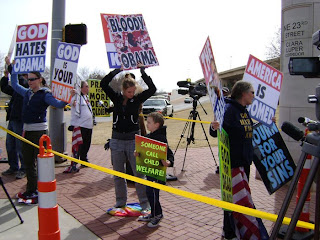 This was a direct result of an email exchange wondering what kind of life that little boy in the center of the picture is living, and if it isn't enough for him to be removed from that kind of horrifying existence.

My favorite part of their visit, though, is that the Westboro "Church" randomly chose Moore High School for a second protest in the region. They had posted on their web page that Moore High was full of "violent brats" and "sluts." As far as I know, these kids aren't any more violent or slutty than any other high school in the region or state. The really awesome thing about this portion of the protest is that local bikers reached out to other bikers and they formed a counter-protest. These bad ass bikers situated themselves across from the Jesus-freakery to protect the students and community from the notorious faggotry of Westboro. In addition to the bikers, veterans came out to protest, and high school students stood up for their school and their classmates. Throughout the city, churches held prayer vigils to remind their faithful and everyone else that religion is not all extremist and cultish.

I would have preferred the local religious community made their presence known at the counter-protest, but the fact that all different segments of the community pulled together to oppose the nutjobs gave me the warm fuzzies. With the attention given to these extreme groups, it's easy to forget that most people are decent and are willing to stand up for what's right and rational.
Posted by Jera at 2:06 PM No comments: