A Book about Jim Henson

OK, everyone, get the tissues ready. 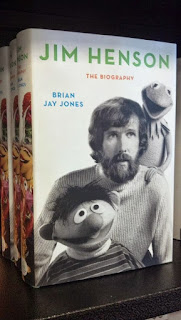 So, those of you who know me, know that I've been a Muppet fanatic FOR. EVER.  Seriously, I take my Muppets very seriously.  I grew up watching The Muppet Movie and The Great Muppet Caper.  I had a vinyl record of the Muppet Movie soundtrack that I wore out on my little Fischer Price record player.  I had a Miss Piggy doll with a purple turban and silky purple gloves; one of the worst moments of childhood was leaving her outside overnight and finding her the next day, victim to the neighborhood dogs.  I discovered David Bowie through Labrynth, essentially, which I'd wager is pretty much the opposite of how other people discovered his music.  I mourned the untimely death of Jim Henson.  I tried to name my son Kermit (his dad saved him from that fate).  One of my happiest memories was graduating college and going to Disneyworld, where I took far too many pictures, and got to actually sit in the Muppet Theatre and watch animatronic Statler and Waldorf.  I think that was more exciting than graduation.  I learned to love the slight shift of the Muppets after Jim Henson's death, and experience the excitement of discovering new sides to their characters.

My boyfriend/significant other/life partner/fonfon ru knows these things, and will give me gifts that find those little bits of joy in my brain that get buried under to do lists and a need to pay bills.  I have the original Muppet Movie soundtrack album again.  We found the exact Miss Piggy doll in a thrift store.  I now have a little Constantine doll to add to my growing collection.  When he heard about this biography, he bought it for me, and I have to thank him for it; this book of voodoo that created some kind of frankenstein of intense emotional experiences.

I'm not sure that I want to write a review.  The whole experience of reading it left me...I guess bereft?  I know that's a dramatic way to put it, but a sadness just lingered.  It's not often I cry about a story, true or not, but this left me feeling rather hollow and strange.  It wasn't even making sense to me, either.

Things I could identify from the experience:


Overall, it really renewed my admiration for the man and the things that seemed to have leapt, full blown, from his head.  But I was also kind of devastated because I am, and will be, so far removed from that kind of creativity and motion.  That, and other dark, wiggly thoughts that hover on the field of vision as I look around at day to day life.

His life is not mine to judge.  It was his, and he lived it, and I'd say he did a damn fine job of it, based on the legacy he left and the people who still love him and speak of him fondly.  The pain of experiencing him in this way was different than I'd had before.  It wasn't like the pain of finding out that your parents have flaws.  It wasn't like finding out that your favorite actor is horrible to his family and you can't even enjoy his films like you did.  It was like finding out a fictional character was real, and you would have loved him and been inspired by him (warts and all), but you are never going to get that chance.  (It's like Rose being trapped in that other dimension for all time, and you are the 4th doctor, but you know how great it is going to be.)

So thanks(?) Brian Jay Jones.  It's obvious that the impact was such that I am not even really able to articulate it well yet, and it has been a few weeks since I finished it.  Eventually, though, I think that the collision of the ideas and experiences of this man with my brain will ultimately result in some kind of life change after someone hauls in the jaws of life and helps me sort out what just happened here.
Posted by Jera at 2:22 PM No comments: