Finishing a Painting After Years

I don't know if all creatives function like myself, but it is super easy for me to get intimidated by a piece I'm working on, if it goes well.  That seems like it should be backwards.  If something is obviously not going well, that seems like it would be intimidating, but usually, I just find that I shift in response to that, or finish it up, and it seems like I generally would end up enjoying that piece after I've had time to think about it (with a couple of exceptions).

But there is one painting in my house that is legendary.  It has burned itself into my children's minds and being ever-present, because I've been working on it for YEARS.  Sometimes it is stacked somewhere, sometimes it hangs on the wall so I can look at it and let it percolate.  Sometimes I'm actually painting it.  Why so long?  For one, it was an original design with an original theme which is new territory, and something that was super important for me to accomplish.  But most of all, it was going far too well, and each time I touched it, I was certain I would ruin it. 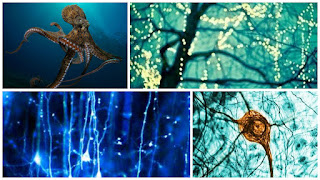 This concept was based on inspiration found in photography, and the idea is this:  microscopic blocks of life have the same patterns and structures as larger forms of life, and isn't that neat.  More deeply, it is amazing to think about the interconnectedness of living things and how we have all been formed.

In this case, there is an octopus floating in water with flecks of light that resemble neurons, neurons in what looks like the ocean, and a tree adorned with lights that resembles the inner workings of the body.

For this piece, I decided to apply the golden ratio, since I believed that this classical form would draw the eye well and provide a unity to a piece that may not make much logical sense to the viewer.

In the beginning, a long time ago (probably 4 years), I started with the background of ocean/flecks/neurons.  It was important to me that these would appear to glow. 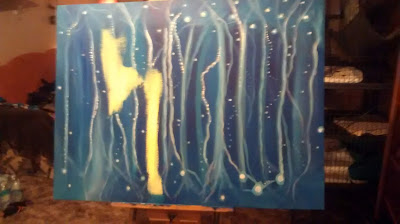 Apparently, my phone at the time was not the best quality.  This background remained the same throughout the life of the painting.  As I was painting the background, I decided to leave a portion of the octopus unpainted, because I had the brain child of attaching an led to the inside of the frame and letting the octopus glow through.  It would provide those spots of brightness.  I believe this inspiration came not only from the intense brightness of the neurons, but also the look of the yellow base through the blue as natural light shone through (while it was on the easel).

I spent some time looking for simple LEDs that function on a solar basis, but have not found any yet.  to me, that would be the perfect set up for this piece.  Or a tragic miscalculation, who can say?

At this point, I was super pleased with the progress so far.  So much so, that I was ready to proceed, and only a little scared to ruin it.

I started on the octopus proper, and wondered why I decided to paint such a big piece. 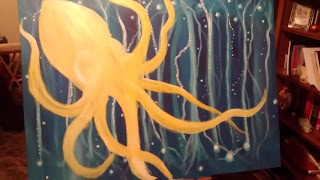 As I was painting this level, I worked a lot with basic highlight and shadow.  Also shape of the legs.  This is when I started to lose confidence.  The legs were mostly the same-ish size, but there was already some variation that didn't make sense perspective-wise.  Also, there was some dry brushing outside of my established lines for the things.  I wasn't going to let that stop me, though.  I was convinced that the next step could fix all that.  (This is still in the old house, so we're months in to a year in at this point.)

At this point, I was convinced that not only had I screwed it up, but that I didn't possess the ability to execute it in the way that I wanted.  I kept thinking that there was a skill that I could learn that would make me understand how to finish it. 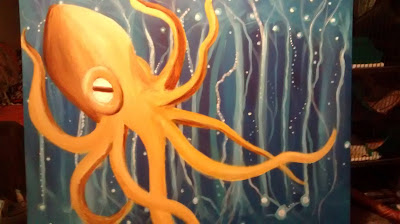 In particular, I wanted a rough texture no the octopus that looked organic.  I considered a few different methods to achieve it.  Spray paint, which I had a burgeoning interest in at this point.  A rough sponging kind of thing could work...but I didn't like that either.  So it sat.  Sat in view, then slowly got moved out of sight, but didn't leave my brain for quite some time.

In addition, the dry brush strokes around the tentacles never got resolved.  I kept looking at those and thinking that it was too messy to be finished, and that without the paints that I had at the time of the background, it would be very difficult to fix.  Also, I do a lot of color mixing as I lay down my backgrounds, and acrylics dry very quickly.  There is almost no way for me to go back and make an addition to a background blend.  I was very disappointed in my inability to make these lines smooth ( and attempts to correct the this led to a mixture of tentacle thicknesses).

Because of these issues, I didn't do anything with this painting for a long time, still considering different options and ways forward, and telling myself I really needed to get it finished.

So I had been offered a wall in the gallery/work space, The Space in Norman, affiliated with The Maker's Market.  Most of the pieces that I was hanging were abstract pouring pieces, and I felt it was important to balance that work with pieces that reflected more of a range of my artistic style and technical skill.  On a sleepless early morning, I pulled out the piece, and I started work.

Here's what I discovered:  it was practically done.  I looked at it and realized that the reason why I couldn't figure out what it needed was because I didn't want to cover up the gold color of the octopus.  I like to paint smooth figures, and adding roughness is contrary to my impulses.

Also, looking at the deviations that I considered errors wasn't the same for me.  Recently, I had gone to Ft. Worth, and in doing so, saw great works by very famous artists, and was astounded to see a number of unfinished canvas edges, pencil marks that were blatantly obvious, and paint scrawled out of lines.  I even saw paintbrush hairs stuck in Great Works (tm) by masters!  I highly recommend any painters trot themselves down to the nearest museum that houses classical art and modern art.  You'll be inspired and intimidated and hopefully learn to relax just a little bit.

So, in the end, all I needed to do was touch up some highlight and shadow, add the suckers on the octopus, and I think I was completely finished in two hours.  Think of it.  Parked for two years, done in two hours. 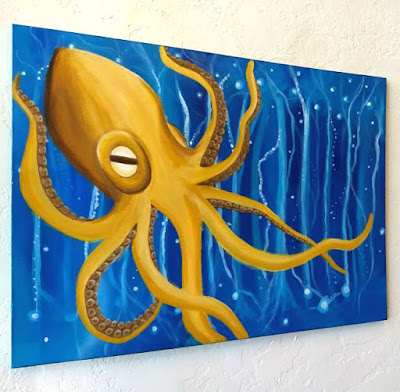 Granted, I did learn things in that time, though they weren't what I thought I would need to.  I learned to accept imperfections as part of the creative process and a part of the piece.  The overall piece is not designed to be hyper realistic, so it makes sense that there is room for errant brushstrokes.  Also, the piece retains that smooth quality that I really loved, and when you look back at the inspiration collage, it is a good representation of that idea.

This piece is now hanging in downtown Norman (pictured above), and on the night of my first ArtWalk, was the most popular piece in my exhibition, and has grabbed the attention of at least one person, who has committed himself to one day owning the piece. 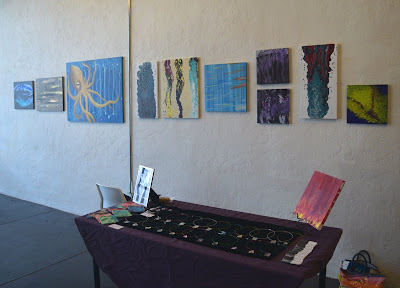 This piece is part of a series, which I can finally continue.  Sneak peek of the inspiration is below: 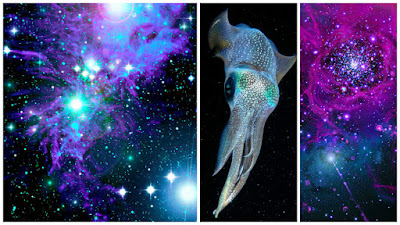 Also, get yourself a good camera to take pictures with (see the last pic compared with the others)